I met a wonderful woman in Oaxaca named Foti years ago. She has visited me several times here in Tulum since. Well, the thing about Tulum is people come here. If you are here, they stop by and visit. They come to see you and they don’t, if you know what I mean. Generally, they come for the beach.

Anyway, she came again for the opening of my friend’s cooking school, Lina’s Mexican Kitchen. (check her out on Facebook) It was Lina who introduced us. Foti is a small woman with a big spirit. Oaxacan woman are strong, intuitive to the point of witchcraft and interesting. She is at least 65 years young and took a 25 hour bus from Oaxaca for the opening. She planned on staying one night and leaving the next day. Maybe she didn’t come for the beach after all.

As we were dancing, she asked me, “why should I practice yoga?”

I was a little surprised. I never thought she would be interested and was unprepared to answer with two vodka tonics behind me and nearly an hour into the next day.

I told her, “well…. There are many reasons.”

We sat down to discuss yoga. She told me how she had been invited to a class and was not sure if it was worth the investment.

“My neighbor is teaching and she wants 40 pesos.”

That is about $2 US. I sighed, realizing it was a lot of money for her. But I had this conversation with myself the week before during some expense accounting and soul searching. I want everyone in this little boom town called Tulum to be able to practice yoga. Even better if they do it at my studio, Tribal. But I also need to support myself, my staff and my teachers. It gets tricky. People who live here want to pay 50 pesos a class. That is about $3 US. If I charge that I cannot stay open. If I charge more, some people may not come, that simple.

I looked at Foti, knowing she lives alone on a pension. She takes small jobs when she can. She confided in me that she has pains in her lower back and down her leg. I know yoga would help her. She looked at me to explain it, however.

I told her, “Yoga is mostly about breathing. You bring more oxygen into your lungs and move energy in your body. That helps everything: oxygen feeds your heart and your brain and your muscles. And the postures, or asanas as they are called, help unblock energy to allow this oxygen to go to all the places that need it the most and the places where it couldn’t get before because you were blocked.”

I shook my head at my response and felt inadequate as a teacher and now yoga studio owner. But that was all I could come up with at 1:30 am in Spanish, trying to explain yoga to a woman who believes that God will cure her if she prays enough and that exercise is walking. She looked at me, trying to understand.

I added, “and that increased oxygen might help get rid of the pain in your hip”.

Foti smiled and told me, “well then, I guess it is worth the investment”.

I hope the rest of my clients feel that way. 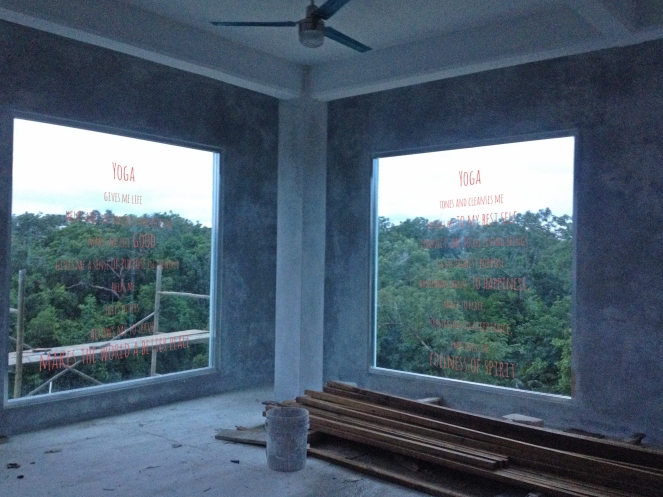